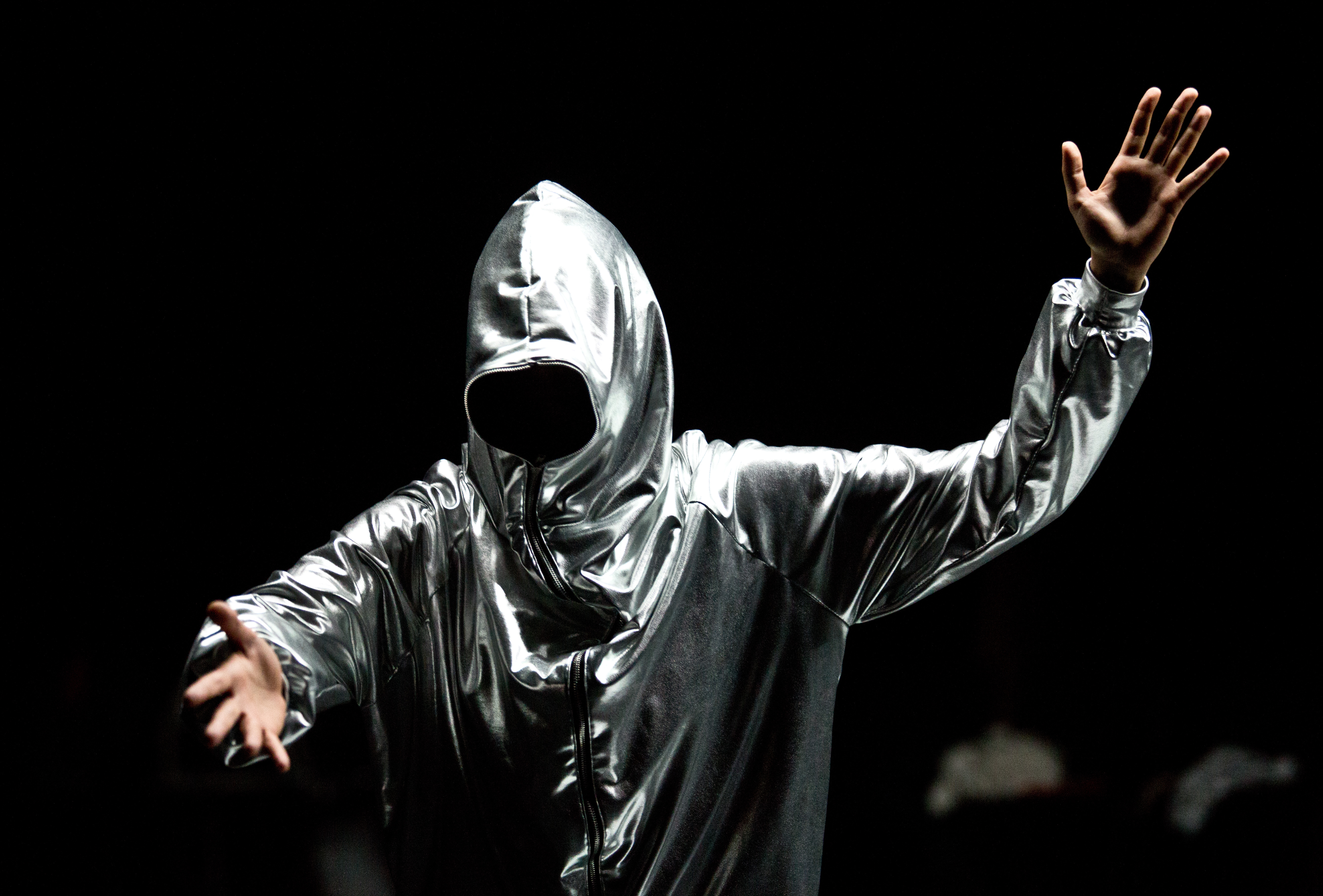 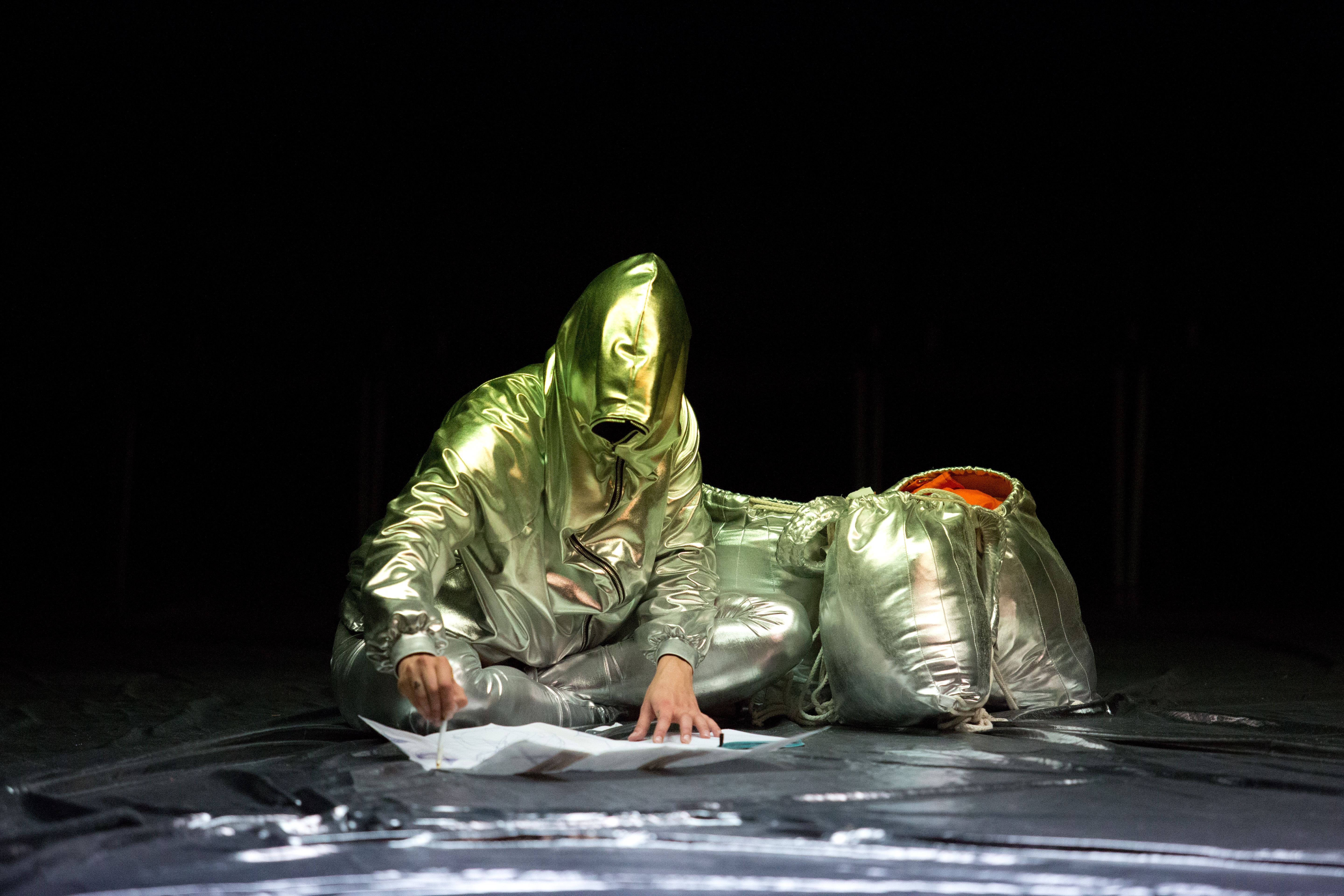 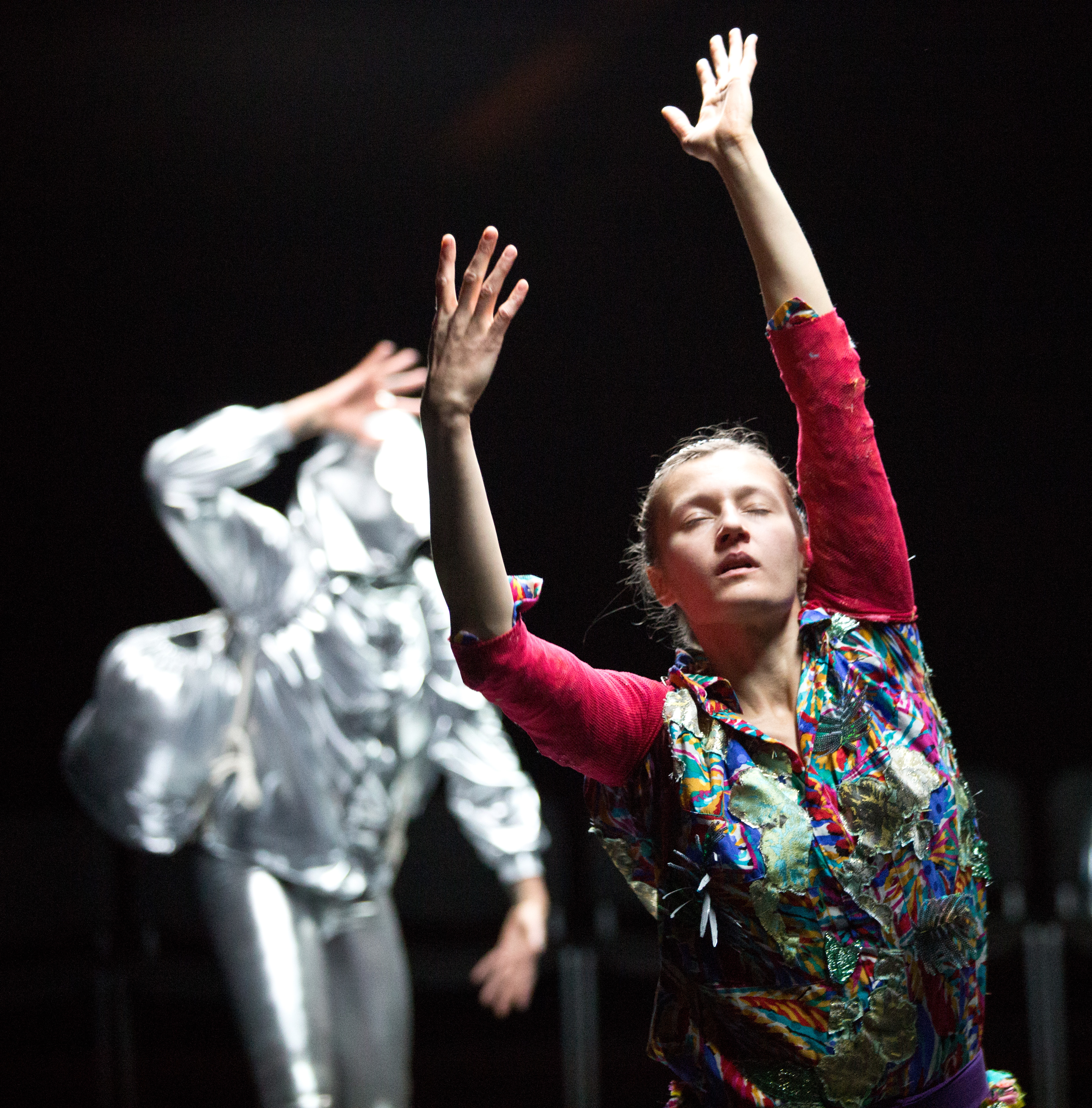 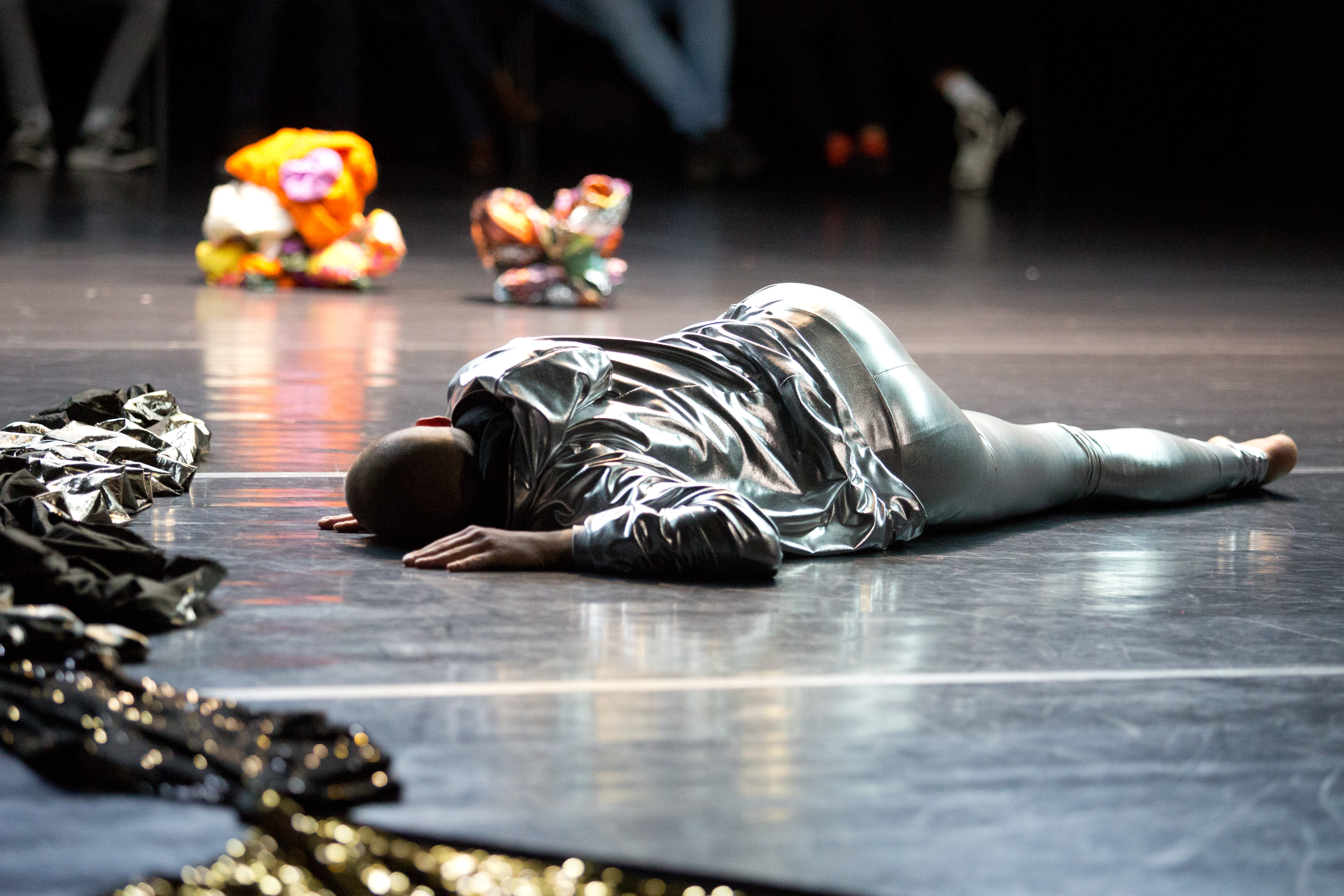 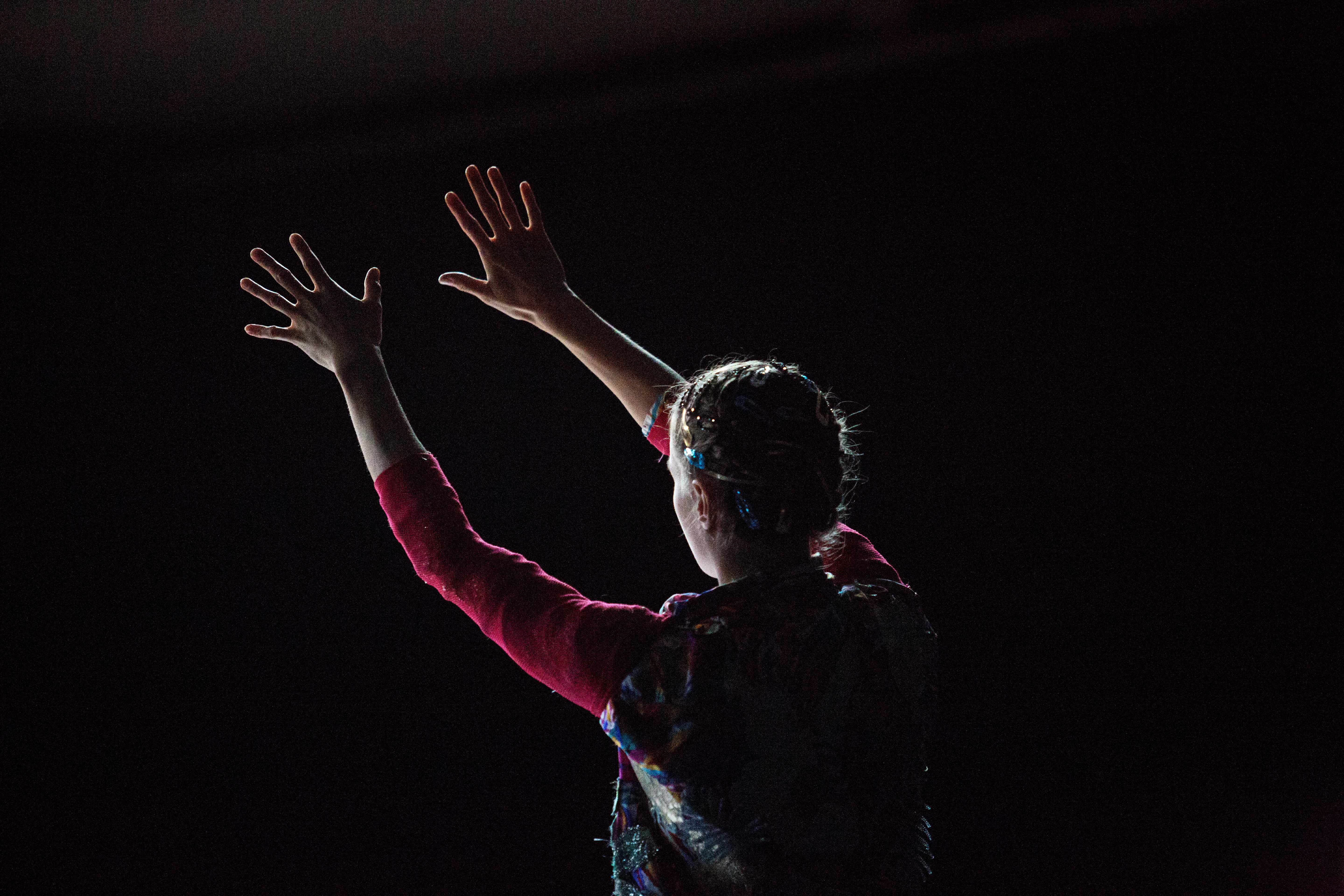 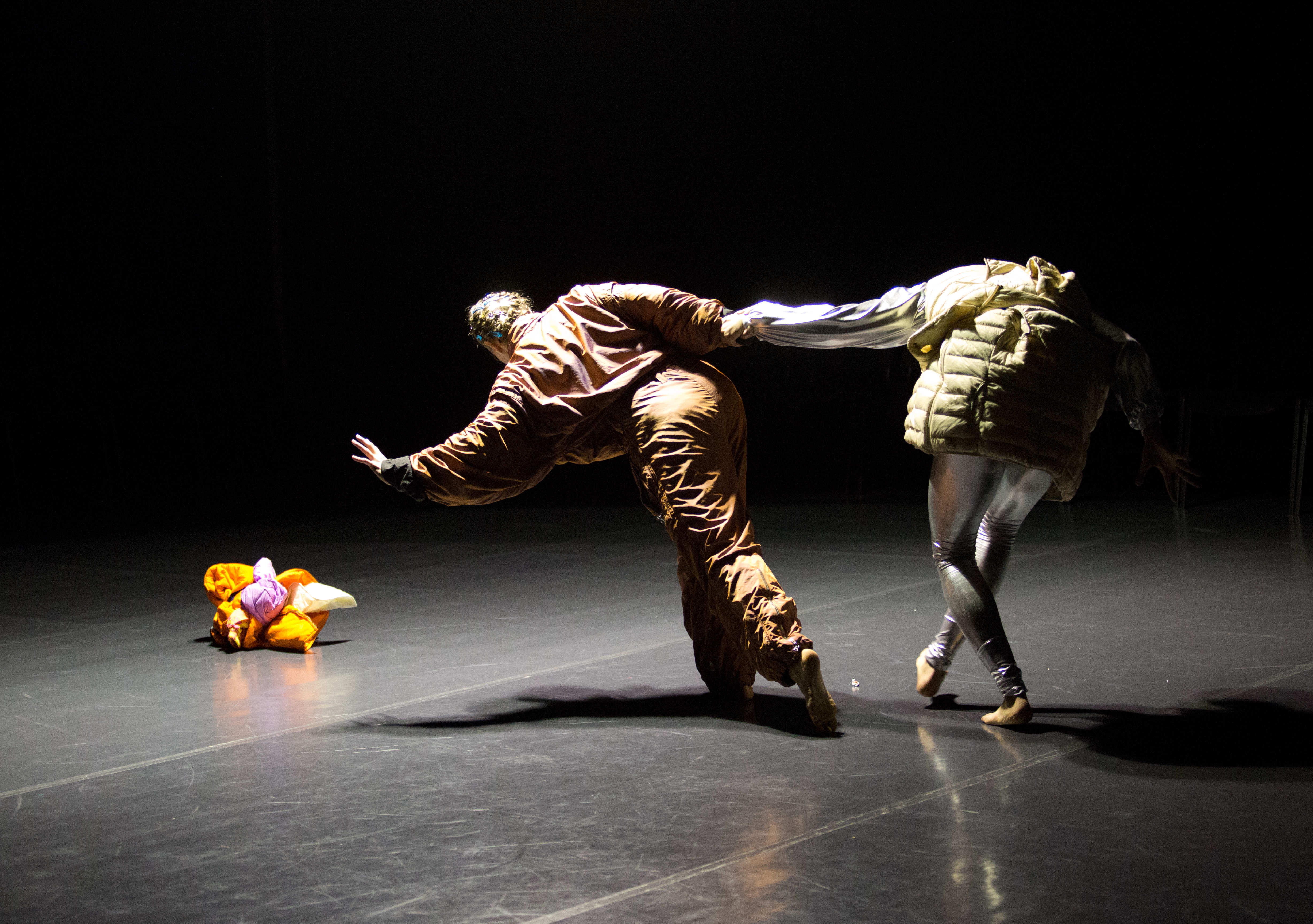 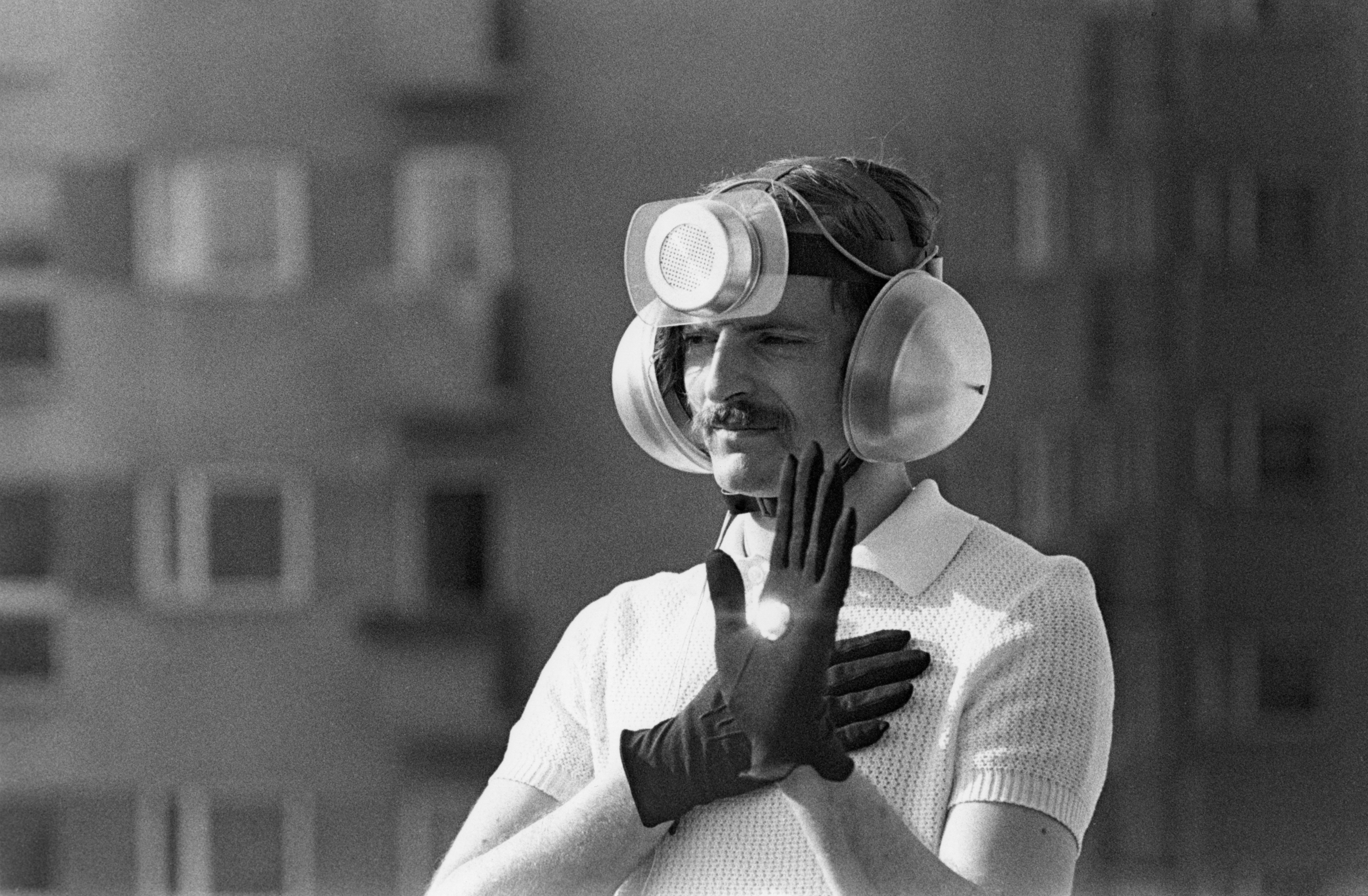 In Pole Reports from Space, Claire Croizé and Etienne Guilloteau venture into unexplored territory: together with Justyna Kalbarczyk and Krystyna Lama Szydlowska, the choreographers tackle the music of the Polish Radio Experimental Studio. Between the 60s and 80s, composers such as Eugeniusz Rudnik, Elzbieta Sikora and Tomasz Sikorski developed bold and visionary electronic music with a covert subversive message in this studio, under the nose of the communist regime. Pole Reports from Space refers to a work by Rudnik that processes sound recordings of cosmonauts into a unique soundscape. Futurism and utopia, old school Soviet science fiction, activism and progress-oriented thinking are key concepts that inspire Claire and Etienne to create an equally daring choreography that plays with the presence and absence of the body in electronic music.

This production is a commission from the Art Stations Foundation and the Adam Mickiewicz Institute (IAM) and will premiere at the Stary Browar Art Center in Poznán, Poland on September 28.

For upcoming performances, check out the agenda.
Concept and choreography
Claire Croizé and Etienne Guilloteau
Created with and danced by
Justyna Kalbarczyk and Krystyna Lama Szydlowska
Music
Polish Radio Experimental Studio
Costumes design
Anne-Catherine Kunz
Light design
Dominique Pollet
Produced by
ECCE vzw and Art Station Foundation
Co-produced by
Art Stations Foundation by Grazyna Kulczyk
Supported by
Norwegian Artistic Research Program- Norwegian Theater Academy Østfold University College
Residency creation
STUK
Copy right image
Krzysztof Wodiczko, Personal Instrument, Warsaw, 1972, phot. courtesy of Profile Foundation
With the support of the Flemish Authorities. The project is created by the Adam Mickiewicz Institute as part of the NIEPODLEGŁA, the international cultural programme celebrating the centenary of Poland regaining independence. Financed by the Ministry of Culture and National Heritage of the Republic of Poland as part of the multi-annual programme NIEPODLEGŁA 2017–2022.
PZAZZ review by Pieter T'Jonck ( translated by Deepl)
SZUM / Pole Reports from Space
THE SPACE BETWEEN / ECCE ETIENNE GUILLOTEAU & CLAIRE CROIZÉ
The past of the future
Nobody can imagine much more in experimental electro-acoustic music from the second half of the twentieth century. Even fewer people know that there were musicians active in this field in Poland. In 'Pole Reports from Space', however, Etienne Guilloteau and Claire Croizé (ECCE) bring such music to life. A small concert of 'The space between' is a nice introduction to this special evening.

01 OCTOBER 2020
In 1957 something began to brew in the Polish music world. Without the government's consent, musicians from the Polish Radio Experimental Studio ('PRES') experimented with electro-acoustic music. An exercise in sneaky freedom. The group survived the fall of the Iron Curtain, but in 2004 the curtain fell over this studio. In recent years the oeuvre of these musicians has been taken from under the dust. To my surprise Krzystof Penderecki also belonged to it.

Through previous contacts Etienne Guilloteau and Claire Croizé from the 'Art Stations Foundation' in Poznan, Poland, were invited to create a choreography to this music. The result is extraordinary to say the least. This music may still sound surprisingly contemporary, except for the excessive use of echo chambers, but still it was put together with primitive means. In a small concert for the ECCE performance the collective 'The space between' in the mini-concert 'SZUM' shows how it went and how it sounded.

While Katharina Smets rhythmically releases sounds and in between tells the story of 'PRES', Inne Eysermans and Ingrid Leonard play that music. You can see how they can create unusual sound images even from simple means such as ticking pebbles. Meanwhile, video images are running in the background. Initially they are abstract compositions, reminiscent of El Lissitsky, Kandinsky or Malevich, but they do vibrate on the sounds. Later they merge with images of water surfaces, or a glass container in which small pebbles are shaken. These are means the musicians of PRES use in their compositions. In this way they come to life.

You couldn't imagine a better introduction to 'Pole reports from space'. After all, the choreography is based on the same wood-rope principle as the music, and produces effects that you could never have imagined. To begin with, this is already due to the costumes of Anne-Cathérine Kunz. Krystyna Lama Szydłowska (in the sequel 'Lama') appears in a silver-coloured legging and ditto windbreaker. The hood of that jacket is buttoned and lashed around her head. Her face is therefore only a black hole in the silver armour. On her back four silver pouches are knotted as well. A cyborg avant la lettre.

Justyna Kalbarczyk, on the other hand, appears in a uniform with hundreds of strips of colourful fabric stitched on it. A flower girl. The twinkling pins in her tucked up hair reinforce that enchanting image. The two performers stand like this, in pure 'Doctor Who' style, in front of two clichés that coloured the imagination of the sixties: the machine man and the man who returns to his natural innocence. If a layer of 'futuristic' music comes on top of that, you are immediately ready for a choreographic version of 'Back to the Future’.

The beauty of the performance, however, is that it does not get stuck in those clichés. Of course, the movements of the two performers are often very different, like two poles in a force field. But that force field is far from stable, any more than their character is. That's why you get the impression that they are always starting new stories in their sometimes chaotic and varied movements. But actually there is only the suggestion of stories, never anything like a really coherent action. Nor is there a quickly recognisable choreographic structure.
This makes it difficult to stick a name or a word on what you see. Yet the dance works intensely on your imagination, just like the atmospheric music, because it is full of small movements and images that almost immediately ring a bell in your head. But then there is another bell, and yet another bell. Your brain spins overtime to follow it all, but that's exactly what determines the pleasure you get from the show.
Dominique Pollet's sophisticated lighting plan adds his own. It starts from an archaic futuristic image of fluorescent tubes floating freely in space in a V-shape. They flicker unexpectedly or humble magically, but always give the impression that space is a space battleship. Or something like that. Later in the performances, however, large groups of spotlights give the stage a very specific appearance. It then seems as if the dancers ended up in inhospitable regions or on distant planets.
So the piece keeps evolving. Somewhere halfway the performers unpack the pouches on Lama's back. They take out bales of glistening or flowered fabric, and also new costumes. Lama ties a bizarre patchwork of anoraks around her body, Kalbarczyk a shiny overall. Now, each in their own way, they approach the audience, make direct eye contact and leave bales of fabric on empty chairs between people.
A cyborg and a flower girl are now out of the question. Rather two survivors in a hostile world. Worth remembering is the moment when the two women seem to drag each other through a blizzard. Until they reach a patch of dust and are suddenly rescued. It is as if you were watching a sci-fi adventure film or a game, but in a string version.
The scene evokes the atmosphere of films from 50 or 60 years ago. Special effects hardly existed then, but that didn't stop filmmakers and musicians from conjuring up their wildest imaginations of the future with home and kitchen tools.
Wild imaginations, visions of the future, but with the old-fashioned glow of Technicolor and minimal technology. Embodied by two women who keep appearing differently. It is miraculous and beautiful. The future never looked so beautiful.
https://www.pzazz.theater/recensies/dans/het-verleden-van-de-toekomst
Fyllenia’s dream